On the 18th September this year a Memorial Concert took place at the Bacon Theatre in Cheltenham. It was honouring Mick Dolan, a native of Birmingham, who died from cancer in August 2014. Mick, who had been a professional musician since the age of sixteen, had gone first with his brother Steve, to play a season in the Ebony Combo at the Headland Pavilions in Bude, Cornwall. After that Mick went on to form other bands; Cock-a Hoops, Hard Meat, Fruit Hill Boys, Big Front Yard and the Dolan Brothers and still had time to be a member of various other bands including the Spirit of John Morgan and Top Catz.

In later life as a sound engineer, producer and musician, he worked with a wide variety of musicians, amongst them were Ralph McTell, Steve Winwood, Show of Hands, Mick D’Abo, Fisherman Friends and Mick Jagger.

He died in a hospital in Turkey, where he lived for half the year. At this time his partner made contact with Help Musicians UK as Mick’s funds were frozen by the Turkish legal system. Help Musicians UK helped out and we determined to honour their quick and sympathetic help. We had always planned to have a concert and Mick had wanted Help Musicians UK to receive any profits.

As the stage manager for the night I had a unique view of a concert that took off with an empathic audience and Martin Fry’s brilliant photographic montage. A capacity audience were warmed up by Keith Donnelly who, with his unique Geordie humour, acted as the night’s MC.  He introduced a first half with contributions from Dik Cadbury, John Richards, Nigel Mazelyn Jones and finished off by Johnny Coppin with his band including Phil Beer, Paul Burgess, Dik Cadbury, John Broomhall, Gareth Samson, Mick Candler and Matt Clifford. The latter, who had just finished a tour with the Rolling Stones, brought a message of sympathy from Mick Jagger.

The second half was kicked of by a wonderful rendition of ‘Over there in Paradise’ by Steve Ashley, They were followed by Red Shoes with the distinctive voice of Carolyn Evans and then the rock of the Kate Gee Band with the guitar playing of Bob Wilson, the vibraphone magic of Poli Palmer and solid drumming from Rob Mason.

Next up Gordon Jackson introduced a band consisting of himself, Greg Platt Lake, Jon Broomhall, Poli Palmer, Julian Crook, Bill Hunt, Phil Capaldi, Liz Leaverland, Rosanna Lefevre, Rob Mason and the Little Big Horns of Patsy Gamble, Steve Trigg, and Wrathbone Trombonista. Greg, Phil and Liz fronted on songs before the final act was introduced. The man known as the ‘Gaffer’ Steve Gibbons walked onto stage and blew the house down with a talking blues followed by Dylan’s “Like a Rolling Stone’ and Chuck Berry’s “Johnny be Good’. The finale involved everybody gathering on stage to firstly sing the Band’s ‘The Weight’ and then an uplifting version, featuring Mick’s niece Maria Dolan, of Dobie Gray’s ‘Drift Away’.

Those who were present will remember the concert for many a night and Help Musicians UK will benefit to the tune of around £2000.

Scroll through a collection of photos from the concert below. 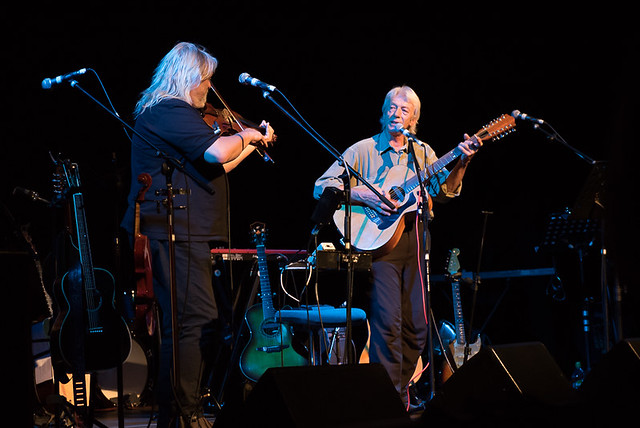